Home ownership is down, but does the UK REALLY have a shortage of homes?

Last week marked the publication of yet more data illustrating the problems facing the UK housing market. Specifically, yesterday's headlines related to home ownership across the country falling to its lowest level for 30 years. The study by the Resolution Foundation finds that home ownership has plummeted from its peak in the early 2000s; for example, home ownership in Greater Manchester has dropped from 72% in 2002/3, to 58% today. Many other areas of the country have also seen the percentage of people owning their home fall by double digits, though the problem continues to be most pronounced in London and the South-East. In response to this latest piece of news, housing charity Shelter called on the government to do something about the shortage of genuinely affordable homes. As the UK welcomes its newest Prime Minister, government action to dramatically increase the nation's housing stock will no doubt be a high priority. But is the best immediate response to the problem a surfeit of brand new homes? What about the properties across the United Kingdom that lie vacant and empty? Global Guardians recently commissioned a quick poll of the demographic arguably most affected by the shortage of aff0rdable homes - 18-35 year olds. In previous decades, many people within this age bracket would be homeowners by now; the latest news suggests this trend has gone sharply into reverse. We asked a sample of this age group what they believe to be the most effective way to solve the British shortage of housing supply. 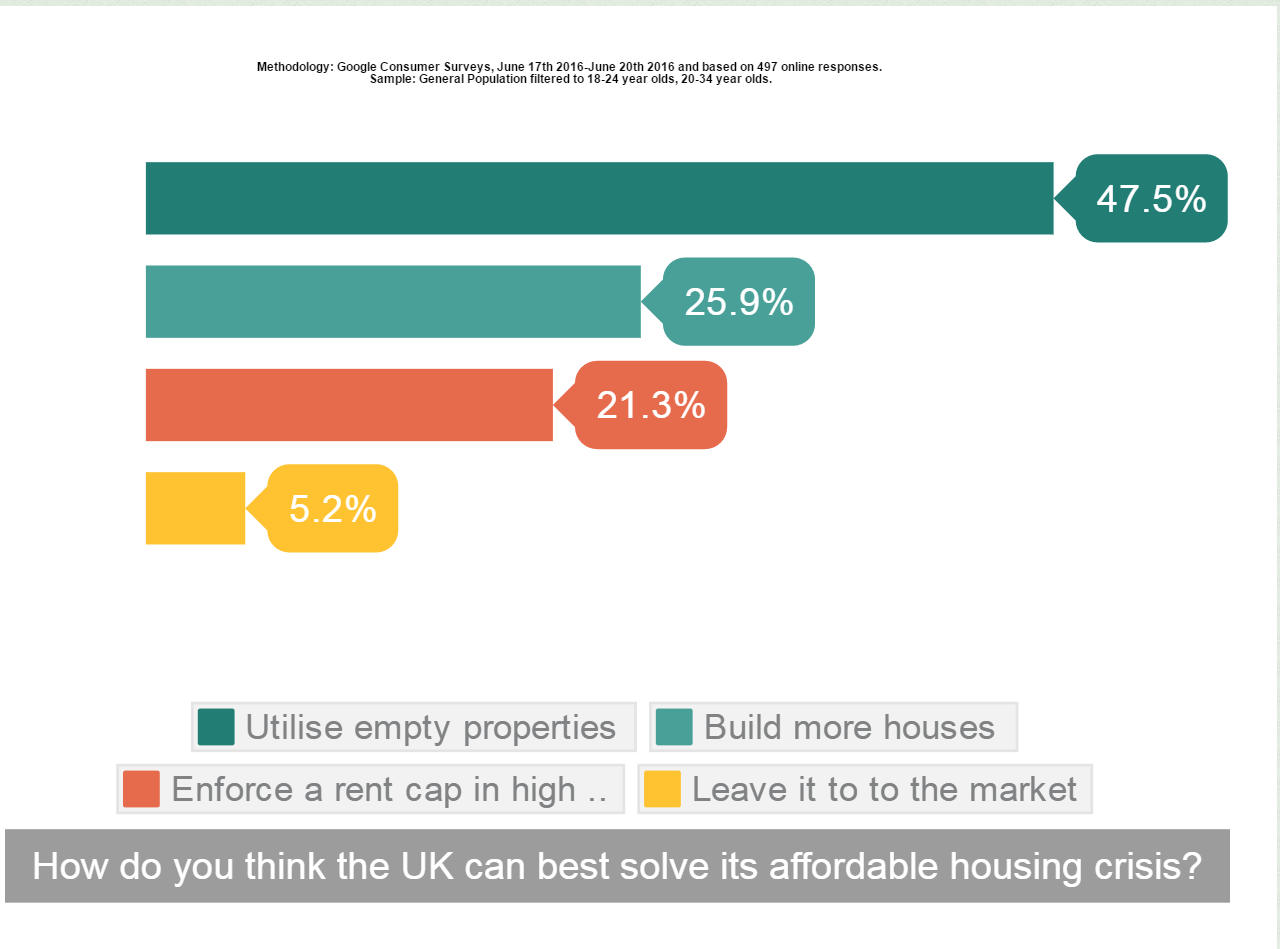 As you can see from the graph, just under half of the people in our snap poll believe that the best and most immediate solution to the national housing crisis would be for the UK government to make use of its empty properties, followed by 25.9% in favour of house-building.

So why are so many properties left vacant?

Despite the constant headlines about a shortage of housing: there are in fact 610,123 empty homes in England - over 200,000 of these had been vacant for over six months; meanwhile Scotland had 31,884 vacant properties and Wales. A report on vacant properties published by the Empty Homes charity in autumn of 2015 found that the North-East of England had the highest concentration of empty dwellings. The report points out that these figures were gathered by local authorities, so there is a chance that some of these figures are being underestimated. The Empty Homes highlights a number of reasons why properties may become vacant on a long-term basis.

Is there a reason for higher concentrations of vacant properties in certain areas?

There are a number of reasons why there may be a higher concentration of vacant properties in certain areas of the country. The Empty Homes report pointed out that regions with lower house prices are more prone to contain vacant properties. Low prices makes a local housing market more dynamic, meaning that properties are bought, let and sold at a faster rate. The report's second observation was that vacant properties were more prevalent in areas of higher deprivation. Broadly speaking, the higher the deprivation of an area, the more likely it is to have a high volume of long-term empty homes. A number of government schemes have attempted to tackle the problems with long-term vacant properties in high deprivation areas, such as Salford, Newcastle & Gateshead, Merseyside and South Yorkshire. These included the Pathfinder scheme, which aimed to pump money into areas where properties were proving difficult to let or sell. Likewise, the Coalition government set up the Cluster of Homes fund which set aside £60 million to help areas with poor quality, empty homes. The fund aimed to bring a minimum of 100 homes back into use.

How will making better use of empty properties help?

The Empty Homes report would seem to support the 47.5% of people in our poll who agreed that making better use of empty premises was the best way to deal with the UK housing crisis. What government schemes such as Pathfinder and the Cluster of Homes funds highlight is that rebuilding and re-using vacant properties can be part of a wider strategy to regenerate a given area. Here are just some of the reasons why:

Despite the build-up of vacant properties in s0-called "low demand" areas, this week's headlines on falling home ownership would seem to suggest that there's always demand. Making better use of vacant properties and houses falling into disrepair would be a proven way of easing demand quickly. As well as boosting supply in areas of existing demand, a strategy to tackle vacant properties may also attract new potential residents and investors back to an area. Vacant properties are both a potential home and a potential investment - renovation and regeneration means something actually gets done about them.

2. It offers the chance to restore communities

This is commonsense - regenerated housing stock would allow boost local economies and improve employment prospects. Neighbourhood improvement schemes help to make areas more attractive to live in, set up a home, retire or raise children. Ensuring that buildings do not fall into disrepair is key to beginning the reconstruction of a local area's infrastructure.

This is broadly linked to points 1 and 2, but investing in regenerating existing properties has opened up new markets and businesses within the property sector.  The work of Global Guardians is one such example; property guardians are new players within a property market where regeneration of existing housing stock is perhaps the best quick fix in an areas of low supply and high demand, where. Property guardianship has proven to be a win-win solution where owners don't know how to make use of empty properties, and tenants need somewhere affordable to live.